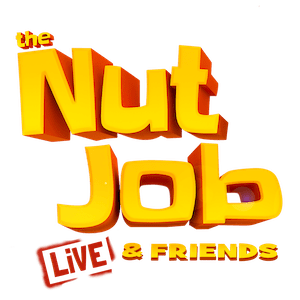 About The Nut Job Live & Friends!

The Original Concept, Book, Music and Lyrics have been created by Ella Louise Allaire & Martin Lord Ferguson, the creative force behind many smash hits such as Ice Age Live! A Mammoth Adventure, the multi-billion dollar franchise from Twentieth Century Fox which successfully toured the world for more than four years, starting at Wembley Arena in London in 2012.

This new musical comedy will have the same beloved characters of The Nut Job and The Nut Job 2 brought to life on stage! With a brand new story and characters, live dancing, singing, acrobatics, magic, original songs, 3D animations, puppetry, comedy and more! The Nut Job Live & Friends! is sure to thrill audiences of all ages.

Shortly after a circus arrives at the beloved Liberty Park, Precious’s pups go missing! Surly Squirrel investigates and discovers a sinister secret about the ringmaster of the circus. Surly must band together with his furry friends to save the pups and save the park!

You don’t want to miss this brand new spectacular show! Get your tickets now.